The GMC Yukon is the rebadged version of the Chevrolet Tahoe. General Motors Company Limited has launched the same model under the banner of GMC and Chevrolet. Both the vehicles are pretty much the same, with a slight difference. The major difference lies in the badge of both the cars.

There are four major models in the series. The standard model is the GMC Yukon. Then is GMC Yukon XL, Yukon Denali and Yukon XL Denali. The Yukon was launched prior than its sibling Tahoe. The production started in 1992, for the model year 1993. The Denali is termed as the luxurious model of the series.

Besides the major modeling, the GMC Yukon (standard) and GMC Yukon XL get two more trim levels; the SLE and SLT. A Denali version is also offered in the base models.

GMC Yukon is the revised version of the GMC K5 Jimmy. The initial production resembled its predecessor in terms of shape and performance. The present-day Yukon shares its platform with the Chevrolet Tahoe, Chevrolet Suburban and GMC Sierra. In addition, the present generation is actually based on the Chevrolet Silverado.

The model came into the market as a shorter version of Suburban. However, the later development of Yukon got drastic changes in its body style. The initial development was done on the GMT K2XX platform. The same platform was divided between both the vehicles, Yukon and Tahoe. Yukon was assigned K2UG platform in the further subdivision.

The GMC Yukon is in its fourth generation. The generation actually started in late 2014 but was labeled for the year 2015. It’s production began in 2013. The interior and features of the 2017 model are different from the previous ones. A number of safety and tracking features have been added in Yukon. 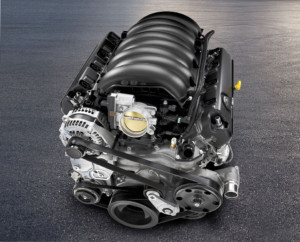 The mechanism of the Yukon and Tahoe resemble a lot. But at some points, we find a massive difference between both the cars. The base engine is the 5.3 L EcoTec3 V8. Add on in this engine is the FuelFlex technology that has been added to save some miles.

Now, here the Yukon becomes powerful than the Tahoe. The Yukon Denali models get the 6.2 L EcoTec3 V8 engine. This engine is also equipped with fuel-saving equipment. The 6.2 L V8 engine is a massive machine. It has been tuned to run 420 horses and boost a torque of 460 lb – ft.

Besides the basic performance, the Yukon has the ability to tow 8500 lbs of weight. When we jump to the Yukon XL model, the capability goes 200 lbs down. It is because of the increased weight of the Yukon XL as compared to the standard Yukon. The Denali and the XL Denali even offer a reduced towing power. Instead of towing capability of the higher trims, GMC has invested more on fuel saving technology.

Fuel saving cars are preferred more by the city riders. The Yukon lies in the ranking of best off-road vehicles, but it even features active fuel saving technology. As like the GMC’s Cadillac cars, the GMC Yukon has been equipped with the cylinder deactivator. The feature has been titled as Active Fuel Management™ Technology. It deactivates the cylinders of the cab, when not in use to save fuel. 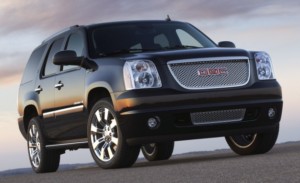 The GMC Yukon has got an enormous body style. In addition to the performance, each model varies in terms of exterior. It’s base model looks like an open mouth predator due to the split grille. When we go towards the higher trims, there we get the netted grille. It gives the look of a happy pooh. Again when we go down the order, we get the 18-inch shining aluminum wheels. The higher trims in the series have the 20-inch ultra-shinning aluminum wheels. Instead, GMC calls them Ultra-Bright.

Well, these are the cosmetics of the car. When we talk about the performing exterior, then we get the active aerodynamic shaping on the GMC Yukon. All the model in the series has been shaped to assist the performance. The bonnet shaping on the GMC Yukon is the active player of aerodynamic. It helps in parting the air friction and allowing more acceleration to the Yukon. 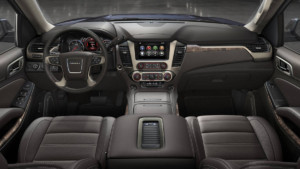 GMC has differentiated Yukon from a number of other series by the company. The interior styling of the car slightly resembles the GMC Sierra and the Chevy’s Silverado. The steering wheel and the dashboard has the aluminum trim. The seats have the contrast stitching. It is also available on the doors. The Yukon allows 8 people to sit in it. It’s Tri – zone Automatic Climate Control enhances the comfort of the driver and passangers.

The immensely powerful drivetrain of Yukon is quite noisy. It also contains inlays to reduce the outside noise of the car and the road. The front doors and the windshield get acoustic lamination. The seals of the doors have three layers.

The superior models of the series have some additional comforts for the interior. Such as the wood trims and heated seats. 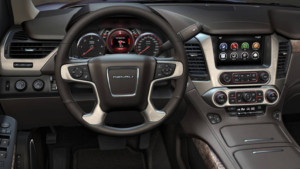 There is an 8-inch touchscreen on the infotainment system of GMC Yukon. It features the Apple Car Play and Android Auto. GMC names the infotainment system as IntelliLink. All the models in the series have the 4G Wi-Fi hotspot. For the users of North America, the internet plans are available for GMC Yukon by AT&T. The navigational panel is optional. GMC also has an app named MyGMC which enhances its features.

The best thing about GMC is that it keeps its safety features as a standard for all the models of a series. The GMC Yukon has a number of passive and active safety features. The basic safety manual has the 7 airbags, in all the rows of the car. The active features comprise of StabiliTrak, Forward Collision Alert, Advance Braking Feature, Side Blind Zone, Intellibeam and adaptive Cruise Control. 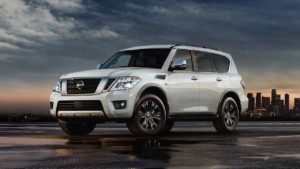 When we started looking for a competition for the GMC Yukon, we discovered the Nissan Armada. Well, the performance capabilities of Armada are a bit higher than the Yukon. It is because of the slightly higher performance schedules of Nissan Armada.

Well, the GMC Yukon could be a good choice if you are looking to get better mileage. However, the only thing to grasp you away could be the price factor.