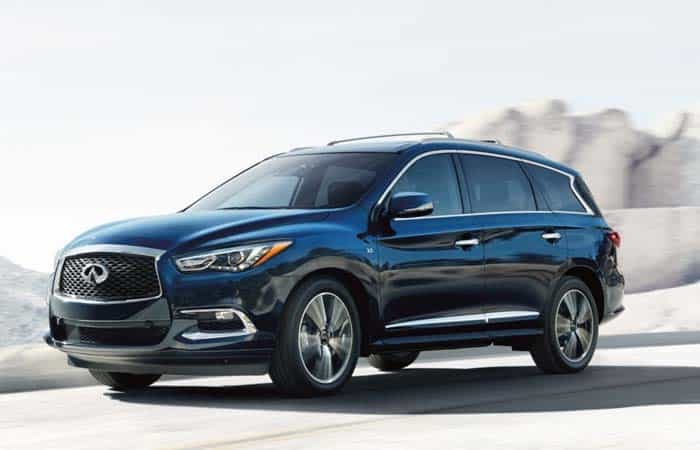 Nissan has been playing various tricks to market the Infiniti. Sometimes they remake their ads. While on the other hand they restyle the old cars and bring them up under a new title. But here with the Infiniti QX60, the scene is a bit different. It used to be the Infiniti JX and it is just rebadged as the QX60.

Well, this all began in 2009 when the initial designs were worked out. They were classified as the XJ and it was displayed for the first time in 2011. The concept model was introduced at the Pebble Beach Concours d’Elegance. And in the same year, the commercial version was displayed during the Los Angeles Auto Show. But still, the launch was not finalized till then.

In 2012, Infiniti qualified the XJ as the QX60. As the Infiniti’s SUV fleet was already floating in the market under the QX banner. Well, this vehicle is not much smaller than the QX70. But the drivetrain literally made Infiniti to call it the QX60. And at the same time, Nissan announced that the Pathfinder would use the same platform as that of QX60.

Let’s go ahead and explore the Infiniti QX60!

The 3.5 L V6 gasoline engine is the only drivetrain available for this car. And it comes mated with the continuous variable transmission. There is no other transmission available. Well, it is 295 hp engine block with 270 lb-ft of torque. And its performance capability is good enough to match a number of its competitors.

The QX60 launches from 0-60 mph within 7.1-seconds. And its top speed is 120 mph. Further, this SUV can hit a quarter mile in 18-seconds. That is certainly good enough to call it a sporty SUV.

Alike the modern SUVs, the QX60 is capable enough to save your budget on fuel. The available Eco mode nearly kills the throttle. And you feel like you are barely driving this car. While the Snow mode adds in some traction to the car. The Sport activates every possible performance condition. Though you can simply blow out the engine at this mode.

While the handling is just fine. It seems much like overrated. The steering wheel is over-reactive, giving you less liberty to move freely. And the braking skills are just satisfactory. The QX60 normally stops within 177 feet from 70-0 mph. Although the other SUVs in the competition could do much better. Ahead of that, the road grip falls around 0.79g. Well, you really count on this car while riding in the city. But on the highways, you would have to a lot more careful.

The QX60 has a similar design to the rest of the Infiniti SUVs. The frontal design, grille, headlamps and even the rear resemble a lot. While the only difference is that, it is a bit wide and long.

Well, the cosmetics are even similar. It has the LED DRL, HID bi-xenon headlamps, LED fog lights, spoiler and the power rear liftgate. The available options include the motion activated liftgate, roof rails, and rear bumper protectors.

The Infiniti has blessed the QX60 with some marvelous spacing. All the three rows have plenty of space to sit. While altogether you can get in 7 people including yourself. Well, the leather-appointed power seats are standard for both the models. Further, the steering wheel and the gear knob are leather wrapped. While the heated seats, heated steering wheel, and the seat setting memory system are optionally available.

The QX60 comes with the 8-inch touchscreen infotainment system. It is a basic multimedia system with just the music options and some other features. While the navigation system stays optional. Further, the other features include the Bluetooth streaming, telephony and voice recognition. The Infiniti QX60 also gets the SiriusXM satellite radio with a 3-months trial period. While there is no option for the Android Auto and the Apple CarPlay.

The Infiniti QX60 gets the sensible frontal airbags. Along with that, it gets a 3-point height adjustable seat belts. Further, it comes with the side airbags, head protection, and LATCHes. The QX60 features the EBD, ABS, traction control, dynamic control and adaptive cruise control for the active safety. While the driving dynamic features include blind spot monitoring, object detection, lane keeping assist, slide-away braking system and tire pressure monitoring system. Ahead of that, it gets the parking assistant with the sensor and the camera. Some additional options include the rain sensing wipers and high beam assist.

The Volvo XC90 sits atop our Infiniti QX60. Though it is expensive, it is all because of its powerful engine. The XC90 has a variation of drivetrains and it has the capability to save some on fuel. And that makes it take a higher rank.

But still, the QX60 has its own pros. It is a car with a remarkable luxury interior and an elegant design. But a decent drivetrain variation can really make it stand better in the competition.