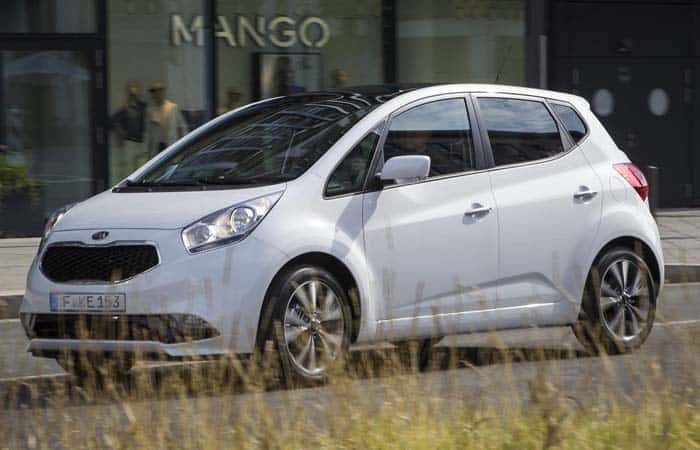 Inki mini monkey, I say a monkey! But that was just a monkey, not a gorilla. Well, we did not see a monkey roaming the streets. Instead, we saw a tiny, gentle and soft hatchback type MPV rolling with five girls stuffed in it. Though we already knew that car. But we never saw her in that pose.

We are talking about the Kia’s Venga. Well, most of the Kias are small. But this seemed a bit smaller than the other Kias. This the Venga, the MPV that is built for tiny loads, certain stuffing and urban rides. Though she is even good at the highways.

The Venga first came out at the 2009 Frankfurt Auto Show. She seemed much like the Kia Soul with an alt body. This car has been designed for the European markets where the economy matters most. And she gets a good response from the Russian and the British markets. The Venga was basically introduced to fill up a gap between the hatchbacks and the superminis. At the time of its launch, Kia had plenty of hatchbacks in its production line. But the MPV market was not covered at all.

Well, the Venga did the job and got some serious results for the company. And its impressions went pretty cool that Kia made her stay even after her successor is introduced. Along with that Venga won the German IF Design Award of 2009. But the odds were never happy with her price.

The 2018 Kia Venga is available for as low as $17,670. And within that range, you can even find a suitably designed hatchback. But still, the prices are high. Well, the Venga comes in 5 different flavors based on the drivetrain.

The Venga’s drivetrain is all concerned about the urban driving culture. This MPV is available with three different engine calibers. And the 1,396 cc (1.4 L) 4-cylinder gasoline engine comes with the base version. This is purely a domestic powertrain with enough power to roam this car with the competitive fuel mileage.  Well, this engine offers 89 hp of power with 101 lb-ft of torque.

The next one comes with the 1,582 cc (1.6 L) 4-cylinder engine. Though it is a lot powerful than the basic version. But it even comes with the fuel-saving capabilities. Well, this powertrain has 114 horses to make 191 lb-ft of torque. Relatively, it seems to be a nice and tweaked version of the Venga. But it is just another city stroke.

Well, the last one gets the 1,591 cc (1.6 L) gas engine with 4 cylinders and takes the seat of the supreme model in the whole series. By the way, the finest model of the Venga gets the mid-level engine instead of this one. Well, this fella is even on diet and takes around 35 mpg as combined fuel mileage. Further, this engine has 123 horses to make 115 lb-ft of torque. This is certainly the performance engine in the whole Venga series. The Kia says that it can lap 0-62 mph within 11.0 seconds. While in our test it took 11.2 seconds. And this Venga managed to touch a top speed of 115 mph.

Overall, the Venga has decent handling skills. It sways pretty well in the city and her turning abilities are even fine. And on the highways, the handling controls are quite subtle for a pleasant journey.

The exterior styling is a bit moderate. The Venga comes with the Kia signature grille, halogen headlamps, and the 15-inch steel wheels. The upscale versions enjoy the ride on the 16-inch alloy wheels. And the LED headlamps are included only in the top models. They even get the DRL along with the LED taillights. Further, the designing is simple, just like another hatchback. And the rear follows with a roof spoiler and standard rear design.

The base models of the Venga get the cloth seats and fiber trims. The mid-level model comes with the leather-wrapped steering wheels and gear knobs. While the upscale versions get the leather seats and leather trim. Further, there are plenty of convenience spots available in this car. Like the side pockets and armrest. The finest trim even gets the heated steering wheel, engine start and stop button and some other amenities to enhance the interior settings.

Ahead of the interior ingredients, the Venga offers good spacing for the front row passengers. The rear even gets some good space allocation. But that is just enough for two people. The cargo bucket is good enough to carry the groceries and veggies. Further, the rear folding seats allow a decent increase for the cargo spacing.

A 7-inch touchscreen infotainment system is available for the Kia Venga. It comes only with the upscale versions of this car. Well, it is the navigation based system, that works pretty fine while driving in Europe. Further, the Venga includes 6-speaker audio system, radio system, Bluetooth streaming, phones connectivity, and telephony. Besides, the Venga comes with the digital clock, external temperature display, and a tachometer.

The passive safety includes frontal airbags with the cut-off switch and the adjustable seatbelts. In addition to that, the Kia Venga gets ABS, electronic stability, and traction control, hill start assistant and tire pressure monitoring system. Further, the active safety includes Emergency Stop Signaling that alerts the driver when stopping braking becomes essential. The Kia Venga even include the rear parking camera with the parking sensors.

See Also: What are Alloy Wheels?

The Nissan Note is a mini-MPV and a very close competitor of the Kia Venga. The power rating of the Note is more than that of Venga. And the styling as well is a bit higher. But the interior spacing is almost same in both the cars.

The Kia Venga is not a bad choice at all. It is a good city car with a decent mileage and subtle performance capability. Indeed this is an acceptable family car.