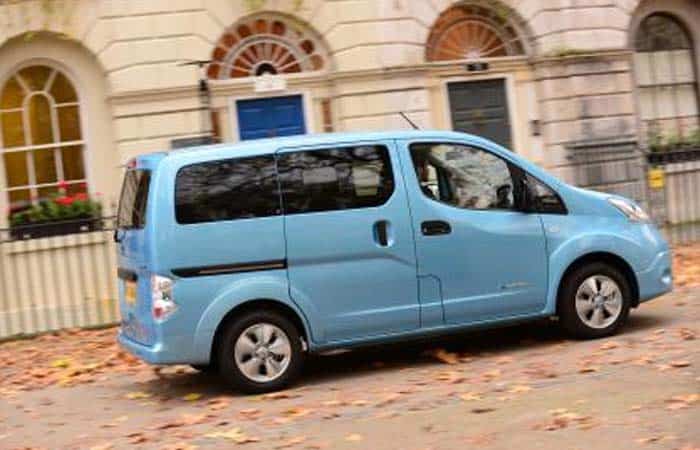 Well, the e-NV200 is its only electric panel van available presently. It is one of the models of the Nissan NV200. The e-NV200 was launched in 2014. But before that, there had been too many concepts introduced.

The development began somewhere around 2010. Nissan pulled in components from its existing electric models and prepared an electric panel van. The first experiment took place with the Japan postal service in 2011. Following that for the other experiment, some vans were given to FedEx London. Later Nissan allotted the trial vehicles to Coca-Cola, DHL and British Gas.

As a result, the e-NV200 was remarked to be a successful vehicle. Finally, this leads to the development of the production vehicle. The initial production model was displayed during the Tokyo Motor Show 2013. Later it was displayed during the 2014 Geneva Motor Show. By the end of 2014, the vehicle was launched into the market. While the US model is still in concepts.

The Nissan e-NV200 utilized the drivetrain from the Leaf. While 80% of the design is based on the basic NV200 model. Well, it starts at $25,180. And there are plenty of exterior and interior enhancement options available for this van.

The Nissan e-NV200 leaves a bold impression on the business community. Its robust electric drivetrain with scalable performance specs adds more fuel to your logistics. Well, not just the businesses, it has been spectacular for the families even. Especially the ones with too many children would prefer such a car.

Well, the performance mechanism of the Nissan e-NV200 is identical to the Nissan Leaf. Just the performance output is a bit lethargic because of its size and weight. While its drive quality and the driving range are quite phenomenal. And if you to consider this vehicle for your business it really could give much on to save the refueling and maintenance cost.

The initial release was made with the 24 kWh battery pack. While recently it has been upgraded to the 40 kWh. This 110 kW electric motor is capable of delivering 107 hp of power at 187 lb-ft of torque. While the total drive range is around 120 miles. The driving range has certainly jumped 20 miles up. Besides, this is drivetrain is mated with the single speed transmission system. Further, the optional quick charge feature can recharge the battery with an hour.

The e-NV200 brings out some decent performance in its class. Though it is certainly first of its kind its performance is fine enough. With this car, you can certainly lap 0-62 mph within 10.3 seconds. The experts could certainly make it shorter. And it is capable of topping 80 mph.

When it comes to the handling, we would really thank Nissan for providing such a crisp in its steering ability. The e-NV200 never seems to be understeered. It sways smoothly and gives enough grip to stay on the track.

Ahead of that, there are plenty of exterior enhancement options available. Such as the sidebars, body side molding, wind deflectors and the mudguards. The passenger vans are available with the doors just like the cars. While the cargo vans have the sliding doors, that make the loading easy.

The Nissan e-NV200 could be utilized as the passenger as well as a cargo van. Being a passenger van, the e-NV200 offers a decent space in all the rows. And it has 7 rows in total. While the cargo van is spacious enough to take in 5 pallets of medium sized bags. In other words, it has around 148 cubic feet of space for the cargo.

Further, the interior ingredients are pretty basic. It has the cloth seats and the fiber accent and trim. And overall the interior appointment is fine.

The Nissan e-NV200 comes with the touchscreen infotainment system. Well, it is the optional feature for this car. Further, it comes with the multimedia options and the smartphone connectivity as standard. Along with that, you get the telephony and the radio options as well. While the navigation stays optional for this car.

Ahead of that, Nissan offers the NissanConnect EV smartphone app to be in touch with your car. Especially, if you want to stay aware of the charging status of the car, this app comes really handy.

The e-NV200 only gets some basic safety features. Like the frontal airbags and the adjustable seatbelts. The active safety column only offers a parking system. Away from that, there is the ABS included as well. And this is all you get with the Nissan e-NV200.

The Renault Kangoo ZE has a strange name, but it is a decent car. It is just another electric van available in the European market. And it is one of the best competitors for the Nissan e-NV200. Well, it has some lower performance specs. But its drive range almost equals the e-NV200.

Indeed the e-NV200 is a new phase of the business logistics. Its drive range is good enough to disqualify a number of other gas eating panel vans available in the market.