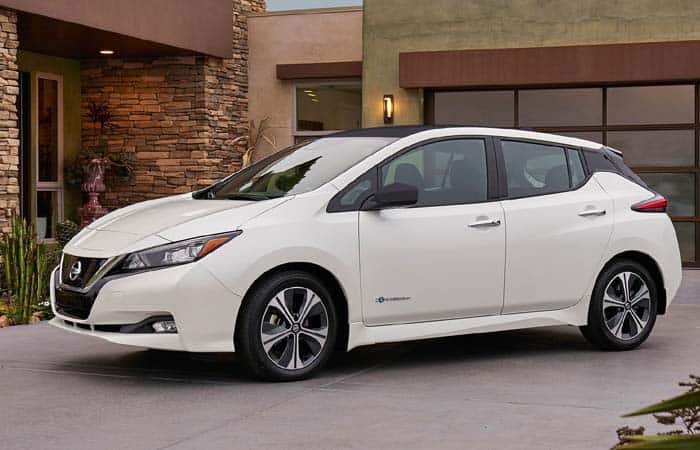 What if someone tells you that a car can make 90 mpg on the highway? You might take it as a fantasy or something from the other space. But after recognizing the electric cars, you would surely believe that cars can really do this.

Well, the electric cars are developing at a fast pace. A few years back there were just the concept vehicles. And now they are becoming the part of the daily ride. The one we got this time is the Nissan Leaf. This is not the first electric car from Nissan. Instead, they even have electric-commercial vehicles in line. But the Leaf is among the practical examples that Nissan has ever produced for the general consumer.

In 2017 the second generation Leaf was introduced. It received the cosmetic as well as performance mechanism improvement. And by the end of 2017, the Leaf for the year 2018 was introduced. Up till now, Nissan has sold more than 300K units of Leaf. And it is emerging to be among the successful electric cars in the world.

The cheapest Nissan Leaf is available for as low as $29,990. Well, the mid-level version could be acquired for at least $32,500. While the finest trim level is available for $36,200. The model line begins from Leaf-S, extends to SV and finishes at SL.

The performance specs include the essence of various Nissan electric concept cars. Through the corridor of the first generation, Nissan has upgraded Leaf to be on a better stage for the second generation.

Well, this recently launched second-generation Leaf got the 110 kW synchronous motor. This motor is capable of generating 148 hp of power with 240 lb-ft of torque. Further, the torque is distributed through the single speed transmission at the constant ratio.

Ahead of that, the Nissan Leaf comes with the 40 kWh lithium-ion battery. The maximum drive range noted by EPA is for 151 miles. While in our mix test the Leaf was capable of touching 145 miles. This driving range is pretty below the top level electric cars. Although some of the top notches is just capable of reaching 120 miles. But the best ones do 190 – 200 miles. And one of the examples could be taken from the Chevrolet Bolt EV.

The motor is installed in front just like the front engine cars. And it has the front-wheel-drive configuration. Well, with these stats, the Leaf has some good performance outcome as well. The 0-62 mph lap was covered in 7.4 seconds. And the max attained speed is 92 mph.

Besides the performance, the Leaf has the decent handling caliber. Over the skidpad, this car gave out 0.79 g of road control. While the braking is good to stop the car at slow speeds. In a sspeedtest, the Leaf stopped from 70-0 mph within 190 ft. Well, such handling controls are fine for a city car. But for the highways, there need to be something more.

The exterior designing resembles a lot of other cars from Nissan. Like it comes with the Nissan’s favorite front grille, the halogen headlamps, and 16-inch steels wheels. The upper trim versions get 17-inch alloy wheels and the LED lights. Further, they even get the fog lights and mirrors with the LED indicators. Ahead of that, the design seems pretty conventional like the common hatchbacks.

The Nissan Leaf gets the charging hatch in the front over the bonnet. Along with that, it gets the shark-fin antenna for the radio and a rear spoiler.

Well, this official sponsor of the Disney’s “Wrinkle in Time” features a decent interior. The base models get the cloth seats and have the availability of the heated steering wheel. While the finest SL model gets the leather seats, leather-wrapped steering wheel, and heated seats.

The spacing is fine in the front row. While the back row offers a decent space for two. Further, the trunk is subtle to carry a couple of suitcases. The 60/40 rear seats folding increases the cargo space and make it able to get in a couple of golf kits.

Further, the Leaf comes with the 5-inch TFT driver’s cluster display with the digital tachometer, rage display, and the charging status.

There is too much safety included in this car. Certainly, the package detail seems over-regulated, much like the Leaf has to be shackled, or it would start flying. Well, the passive safety includes six airbags in 3 positions of this car. Further, it gets the anti-lock braking system, brake force distribution system, traction and the stability control.

Well, the active safety and driving assistant features are pretty abundant in this car. Like it has the speed limiter, lane keep assist, braking assistance, pedestrian detection, active cruise control, high beam assist, blind spot assist, surround view, hill start assist, ride control and tire pressure monitoring system included. Certainly, this is too much for a city car. It seems much like that Nissan has created a car for dense traffic regions.

The market for the electric cars is improving every day. Every next day there is a new electric car introduced. Well, the same reason made it easy for us to find a competitor for the Leaf. It is the Kia Soul EV with a full spectrum of the electric drive. The Soul EV and the Leaf do have some performance and design differences. But these are the vehicles for the green environment.

The Nissan Leaf is relatively a good choice to jump away from fuel expenses. But the competition allows less chance for this car to come up the rank.