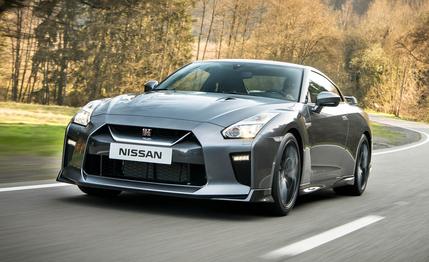 Nissan is not just famous for its family cars and SUVs. It even has earned acclaim because of its sports cars. One of the notable examples of Nissan’s performance rides is the GT-R.

The GT-R was introduced during Tokyo Motor Show in 2007. However, its concepts were already displayed in 2001 and 2005. The latter concept was deemed to be the base of the production car.

Soon after its introduction, the car was first launched in Japan. Later in the same year, it was marketed in North America. Then it entered the European markets. And finally the middle-eastern and the Far East Asian markets even received the Nissan GT-R.

GT-R was actually the model of the Nissan Skyline series. It was famous as a sporty model of the Skyline. Its popularity among the motorsport lovers made Nissan make GT-R as a separate series. Since its initial marketing, around 15,000 units of Nissan GT-R have been sold till date.

In 2009, the Nissan GT-R was recorded in the World Book of Guinness as the fastest car having four seats. Besides, GT-R has earned a lot of accolades and honors. Quite recently, the Nissan GT-R has been called as the Modern Champion. GT-R has also been franchised in video games. The Real Racing 3 (for mobile phones) and the Need for Speed (2015) feature the GT-R. Well, this car is priced as low as $109,990.

It has immense power, an agile transmission and responsive handling. The GT-R is powered by a 3.8 L twin-turbo V8 engine. This powertrain is no less than a monster. It has 565 horses galloping at 467 lb-ft of torque.

Nissan GT-R is theoretically running through its seventh generation. While the launch dates of this car preferably make it the 2nd generation. The improvements for the present year or the seventh generation lead to the increase in the power of the car. This monster had 545 hp of power. But now it gets 20 more horses. Likewise, it has received 4 lb-ft of more torque.

Well, Nissan has even targeted this car to be used as an errand runner. Actually, the Acura’s recent performance model compelled Nissan to make GT-R follow the traffic rules. So, it has received a titanium exhaust system which ensures that the GT-R is less noisy. Along with that, it has reduced around 12 lbs of weight from the car.

Since long, the GT-R is driving on a six-speed dual clutch automatic transmission. The system has received some improvements in the compression and drives ratio. Well, this improvement has made this monster drive more smoothly than before.

The performance obviously increases with the improvement of the mechanics. Prior to the mechanical improvement, GT-R was launching from 0 – 62 mph in 2.9 – 3 seconds. Well now, it takes 2.7 seconds. Further, Nissan narrated that with this improved mechanics, GT-R is capable of reaching 193 mph. But test reports reveal that GT-R can reach 195 mph. On top of this, an R-Mode-Start has been added to the car which makes GT-R launch with increased boost and stability.

Nissan was living pretty comfortably before Acura came up with its neatly designed hybrid sports car. Just the Corvettes and the 911s were there to bother GT-R. But now this monster had to dress up better than the Acura’s. For the present year, the GT-R has received some sporty improvement in the exterior design.

The GT-R sits on the monocoque (unibody) structure. The front and the rear of the car is raised by 5 – 7%. This has made the handling more responsive. Along with that, the stability has increased in the car. Now, the dampers are more adjustable and flexible in all the modes of the car.

Further, the front gets the V-Motion grille. This new grille lets more air get inside the hood of the car which acts as a coolant for the engine. The angle of the front vents is improved to avoid deflection. They are now 30 – 35% stiffer than before. The C-pillar has improved alongside. Now, it can make the air flow more turbulent than it was doing before. This has evenly increased the aerodynamics on the GT-R.

The rear diffuser of the car even adds more fuel to the aerodynamics. It provides a continuous downforce to the car while riding at a high speed. Further, the model for 2017 gets the new wheels.

The Nissan GT-R wasn’t a luxury contender before. Even now, it does not have too much luxury inside. It’s truly a sports coupe, with every bit of it depicting the sports passion. Well, the leather heated seats with synthetic suede inserts, leather accent trim and leather-wrapped steering wheel are available in GT-R.

Well, the upper trim (GT-R Track Edition) gets the Recaro sports seats and black & red accent trims. Further, the noise reduction panel is standard for GT-R. This panel is installed in the windshield. And it reduces the noise by 10 dB.

The Nissan GT-R gets the 8-inch touchscreen infotainment system. The system features voice recognition, SiriusXM® multimedia, Bluetooth hands-free telephony and HomeLink® multimedia. The driver’s gauge gets the sports cluster display. The console allows the driver to adjust the stability of the car. Further, the Bose Noise Cancellation system helps in the reduction of the outside noise. Especially, it is helpful to neutralize the engine sound.

There had been some issue in the safety of this car. During a round in Nurburgring, the GT-R lost stability and crashed into the spectators. Unfortunately, one of the spectators lost his life.

Well, Nissan has upgrades the safety level of the car for the present year. It has sufficient articles for the passive safety of the car. While the active safety gets the sonar parking sensors as a new feature. The cruise control is already appointed in the car.

The Acura NSX made Nissan to improve the legendary GT-R. The GT-R is a true track performer with loads of sporty induction. While the NSX is a multipurpose car. It is a sports car as well as an errand runner. Further, the NSX has the hybrid drivetrain, which is not available in the GT-R. Ultimately, the NSX ranks higher than the Nissan GT-R.

Well, the GT-R is one of the finest cars from Nissan. And the way it moves even allows the amateur to turn into a motorsport driver. Indeed, the GT-R is a car full of passion.