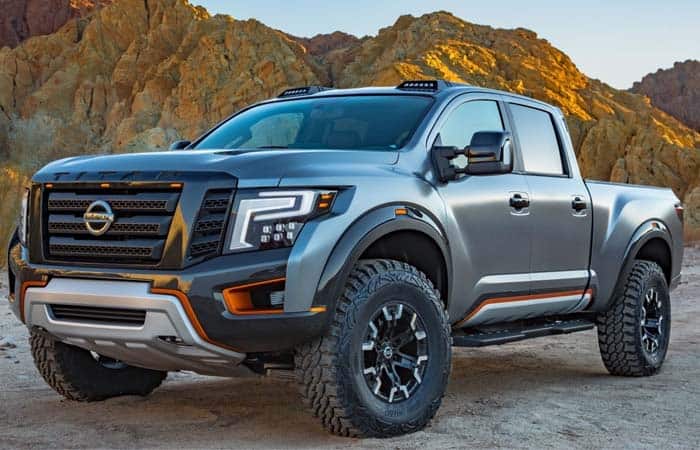 At times you need something huge enough to show power. The relentless world sometimes needs the show of exclusive muscle that can enchant the joy of applaud and fear all around. Well, in the past, the big monster trucks did this kind of job. But now the trends have changed a lot.

We have got something from the past, which used to be a large format pickup truck. But recently it has shaped up into an aggressive monster. Here we are talking about the Nissan’s magnificently enormous, Titan.

This project began back in 1999. Nissan was eyeing to build something huge enough to take care of the competition lead down to Chevrolet’s large format pickup trucks. Well, it was not just about Chevy, but it even got in the Raptors from Ford. After a series of modification Nissan finally introduced the Alpha T Concept during the Detroit Auto Show in 2001. Just after a couple of years the production version, Titan was displayed. This version was mainly based on the 2001’s concept. Further, by the end of 2003, the Titan was introduced in the market for the year 2004.

This was the first generation of the Nissan Titan. And during its whole service, it just received a minimal amount of upgrades. Mainly they were the interior enhancements. Well, during the 2015 North American International Auto Show Nissan displayed the second generation, Titan. This was a drastically different pickup truck than what it was before. A whole new style, an addition of a new commercial platform and the availability of the Cummins diesel drivetrain.

Presently there are two models and three cab formats available for the Titan. The base version is available for as low as $30,030 and the finest model could be acquired for $56,300.

The Nissan Titan continued with the same drivetrain that it had in the first generation. Along with that the Cummins shook hand with the Nissan and introduced the diesel version as well. Further, the gasoline version got more horses to make the drive more fun.

Well, the Cummins planned to go with Dodge. But the Dodge changed its plan and Cummins had to go with the Titan.

Well, if you put the fully equipped gasoline Titan on the track, you would certainly retrieve some good results. The Titan can lap 0-62 mph within 5.9 seconds. And it is capable of scoring 113 mph as its top speed. While this performance is relatively stronger than its competitors.

Ahead of that, the Titan includes the option for the commercial platform. That is the one that you would ever witness in the Nissan NV. That makes the vehicle stiffer than the regular trucks.

The Nissan Titan carries a pretty aggressive design. It has a bold front look and a sharp rear design. Well, the cosmetics are pretty appreciable. It includes a huge grille, projector headlamps, LED DRL and fog lights. Further, it is available in three cab formats; the Single, Kind and Crew. The Single Cab is available with the basic configuration. While the Crew Cab is one of the finest trim level available for the Titan. In addition to that, the King Cab offers the most exclusive configuration for the whole Titan series. Well, the Single Cab is available with the two-door format. And the Crew and King Cabs offer the four-door format.

The base version Titan gets a basic kind of interior appointment. It is not that much basic that we start comparing it to an entry-level hatchback. Instead, it is fine, just as it has the cloth seats, fiber trim and numerous convenience spots. Further, the upper trim level achieves the leather trimmed and premium leather seats, leather-wrapped steering wheel, and gear knobs, heated seats, chrome handles, and fiber appointment for trim levels.

There is plenty of space in this car. Certainly good enough to have four people and a dog. Even a cat would do. The single cab offers just two seats. While the King and Crew Cabs offer space for four.

See Also: Why Cars are Important and Why You Should Invest in One

The Nissan Titan features a 5 and 7-inch touchscreen infotainment system. The 5-inch screen is available with the base models. While the 7-inch screen is for the upper trim level. The system includes the Bluetooth streaming, multimedia features, and radio. Further, it gets the option for the navigation and headrest screens. In addition to that, the Titan even gets the option for the SiriusXM radio, 10 and 12-speaker sound system and Rockford Fosgate Powered Audio system.

The city cars need to be safe enough to keep the occupants alive. While there is much more expected from the pickup trucks. And so is the Nissan Titan. It has everything you need to have it in the passive safety column. Further, the active safety is even filled with every necessity required for this kind of vehicle. Ahead of that, there are plenty of driving aids available in this car. Like it gets the vehicle dynamic and traction control, cruise control, active brake limited slip, blind spot monitoring and some other features.

The Ram 1500 is one of the next options that you would think about if you are paving you way above the Nissan Titan. It is even large and has sound performance skills. But 1500 is equipped with some better features than the Titan. And that makes it a bit better than this truck.

Well, the Titan is certainly a pleasant option if you are thinking about driving something aggressive. But do not forget to carry an additional fuel gallon with you.