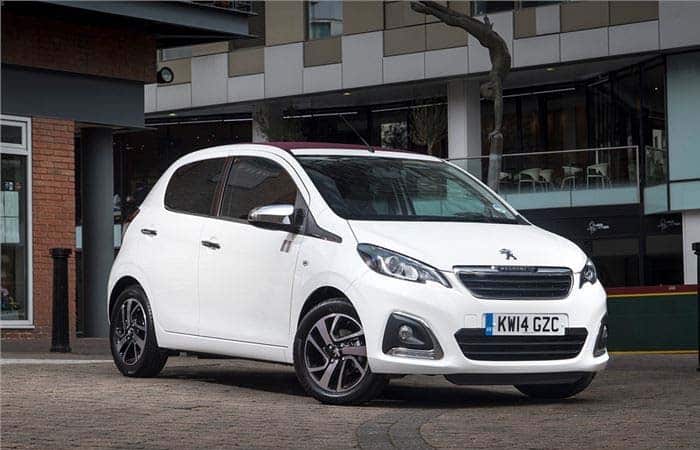 We have seen a lot of identical twins. And likewise, we have tested too many identical cars. Actually, those were the rebadged vehicles. Well, the concept for the rebadging is growing day in and day out. Every other company is badging a car that they do not make. Instead, they bring those cars in because of their fame in another territory. While the parent company did not bring the actual car in as they were never certain that their model would become successful.

But there are some cars that are really identical rather than being rebadged. And the Peugeot 108 is its one close example. Well, we all know that the Peugeot is a French automaker. But they got impressed with the market response of Toyota Aygo. The Peugeot did not ask Toyota to give them the Aygo to rebadge it. Instead, they produced their own 108. While the mechanism in both the cars is the same.

Ahead of that, the 108 and Aygo were introduced at the same event. That was the Geneva Motor Show of 2014 when the 108 was revealed for the first time. Well, the 108 is not just similar to the Aygo. It even resembles the Citroen C1 a lot. Especially the designing is quite similar in both the cars. Not to forget, the 108, Aygo and C1 are built in the same plant in Czech.

Well, the Peugeot 108 hit the streets by the summer of 2014. And since then it is rolling in the market. Further, the model range includes 4 trim levels. And $11,870 is the starting price for this car.

When moving up to test the performance of 108, we met another Aygo and C1. The 108 is fully built using the concept of the Aygo. Even the drivetrains are the same and their powering ratio is not different.

Well, here even you will confront the 1.0 L 3-cylinder engine as the base variant. It is the Toyota’s KR-FE engine having a pretty long service tenure. Well, the 108 gets 70 horses with this engine making 69 lb-ft of torque.

The 1.2 L 3-cylinder engine takes the second seat. And it is the Peugeot’s EB2DT series engine. Well, here in 108, this engine provides 108 hp of power with 103 lb-ft of torque. The title 108 is not based on this engine’s power ratio. Instead, it is the next sequel in the series after 107.

Besides the engines, the gearboxes are even the same. Though the 108, Aygo and C1 are not referred as rebadged versions for each other. But they are extremely identical. Well, the 5-speed manual transmission comes standard. While the 5-speed automatic stays optional. And like rest of the 108 identical cars, here even the manual transmission runs abreast. While the automatic is just like a lethargic fella.

Taking this car out for a long journey is never a distraction. The powertrain keeps the drive alive and the handling keeps pleasure in the journey. Further, the steering was absolutely fine while driving on the packed roads, somewhere in Europe. And braking never disappointed us. Certainly, the Peugeot 108 is packed for a decent drive.

The Peugeot has followed the 108 identical counterparts for the exterior styling. The frontal design is Peugeot’s personal configuration with its standard grille. While the rear is quite similar to the Aygo and the C1.

Well, the cosmetics include projector headlamps with the LED beams, fog lights, LED taillights and the steel wheels. The base model gets the 14-inch steel wheels, the middle trim comes with the 15-inch steel while the top trim enjoys the taste of 15-inch alloy wheels.

The interior setting separates 108 from the Aygo and the C1. The interior appointment is fancied with different colors for the trim and seats. Further, the cloth seats are in the fate of every model while the leather stays an option. Along with that, the black fiber accent is a common deed for this car.

Well, the spacing is fine in the front row. But the second row is not much modest with space. The boot is sufficient for some groceries. While if you need some more space, than just slide down the rear row and you get a whole big trunk for the cargo.

The Peugeot 108 is not shy to the technology. It gets a 7-inch touchscreen infotainment system for multimedia and radio. Further, it gets the Apple CarPlay and the Android Auto. While navigation is based on the smartphone feature. Some additional features include the voice recognition, Bluetooth streaming, and the telephony.

The 108 gets a limited amount of safety equipment. But it includes everything essential. Well, for the passive safety, the 108 gets 6 airbags installed in the sides and the front. Along with that, it gets adjustable seatbelts with the ISOFIX for the children. The active safety features include the electronic stability program and the antilock braking system. Ahead of that, the 108 gets the tire pressure monitoring system, active city braking, lane keeping assist and parking assistant.

The Peugeot 108 is comparable to the Volkswagen Up. The Up is another decent option when you are looking for an economical car. And they both have almost an equal share in the market. But their demographics are slightly different.

Well, the Peugeot 108 is certainly a fine option if you have to consider the economy rather than the performance.