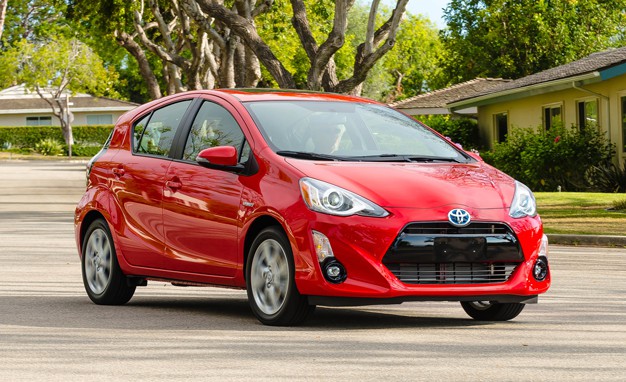 The Toyota Prius has a number of family member. The youngest among them has been titled as Toyota Prius C. It is even known as Toyota Aqua. The suffix “C” in the Prius stands for City. This means that Toyota has designed this car to run underpowered.

Prius C (Aqua) was introduced in 2011, during Tokyo Motor Show. Soon after the Japanese introduction, the car was unveiled as the Prius C at North American International Auto Show in 2012. The car was launched into the market after a few months of its introduction.

Moreover, the Prius C is yet another Toyota Yaris. The design of both the cars is same. And even the drivetrains are quite similar. Besides the Prius C utilizes the hybrid technology while Yaris is settled with the gasoline.

The Prius C is the second highest selling hybrid car for Toyota. The first one is the actual Prius. Till the date, more than 1.4 million units of Prius C have been sold. This car has won the accolade of the Most Fuel Economical non-Plugin Hybrid Car of 2012.

In a way, the Prius C has redefined the culture of hybrid city cars. Its exceptional fuel mileage makes it rank at the top of the most economical cars. But an underpowered drivetrain makes it yet another powerless hatchback.

The landing gears should have a good ground clearance to make a clear landing. Similarly, the wheelbase should be enough to make a car stand on it. Otherwise, it’s just another underpowered and irrational kind of a car.

Well the pricing of Prius C begins from $20,150. Further, it is divided into four models, namely One, Tow, Three and Four. It is certainly a strange titling, but Toyota loves it for the Prius family.

The powertrain of the Prius C was improved in 2015. But this car still gets the 1.5 L inline-4 engine driven using the Atkinson Cycle. The engine is rated at 73 hp with 82 lb – ft of torque. If it was all about the engine, then Prius C was not able to make amid the friendliest cars. Instead, it would have been marked as Total Insane.

But the improved Hybrid Synergy Drive saves it from this shamble. The HSD electric motor has 60 hp of power rated at 125 lb – ft of torque. The combined power of the car 133 hp, which is 34 horses more than it was in 2015.

The powertrain is mated with the Electronic Continuous Variable Transmission, which is standard in all the Prius models. While, the front – wheel – drive is the standard driving configuration available for the Prius C.

As far as we believe, we have run the car for more miles this time than we did before. That’s how we were able to discover a different mileage. Even the EPA has reduced 5 mpg from city and 3 from the highway performance of Prius C.

The Toyota Prius C is though the sibling of the Prius family members. But it resembles much with the Toyota Yaris. It has the same subcompact hatchback styling as that of the Yaris. While the badges and the front grille are different.

The black bodywork on the bumpers and body panels is a fresh improvement. Previously the base model was available with steel wheels. But now it comes with the 15-inch 8-spoke alloy wheels. However, the rest of trim level gets the sculpted alloy wheels. The 16-inch wheels are available just for the Prius C Four.

A pretty economical interior is available in the Prius C. It just like the eco-hatches which have everything to just run the errands rather than pursuing them for performance. Fabric trimmed seats, telescopic steering wheel and soft touch center console are some of the parts from the interior. Besides, the touch tracer display, Softex® trimmed seats and steering wheel are some inclusions in the higher trim level of the Prius C.

Well, we didn’t really find it cool for the passionate driving. It’s subtle and sober.

A 6.1-inch touchscreen infotainment system is available in the car. This system has the Entune multimedia. In the base model, the system works like a music system. There are plenty of options to amplify sound. The same goes for the Prius C Two. Just it has more speakers. The upper trim level gets the navigation and app suite and some other features as standard. A 3.5-inch TFT multi-information monitor is standard in all the trims. It tells about the performance status of the car along with the outside temperature.

See Also: Should You Buy New or Used Car – Pros and Cons

The Prius C meets all the necessary safety standards. This car has 9 air bags in almost every corner. Further, it has whiplash injury lessening and LATCH.

It was quite easy to find a competitor for the underpowered Prius C. One of its sibling is its closest competitor. The Lexus CT200h has everything to surpass the Prius C. Like it has power, comfort and elegance.

Well, the Prius C can only gain your attention if you are looking for a fuel-sipping car. Otherwise, there are a number of other options.