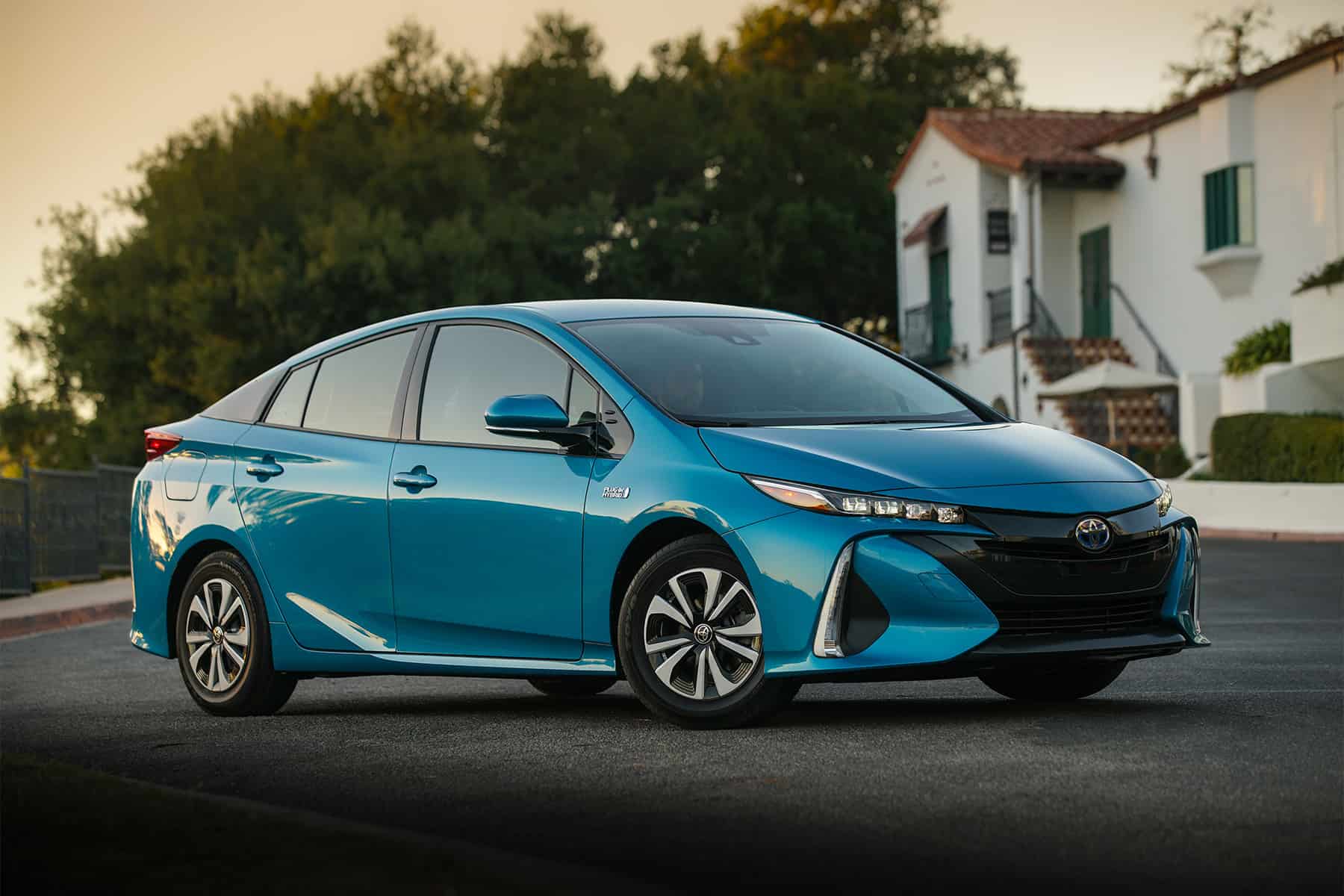 The Prius Prime has earned the Highest Miles per Gallon Equivalent with a Combustion Engine. In 2012, the environmental authorities have remarked Prius Prime as one of the greenest vehicles presents today. This car is also famous as the Toyota Prius Plug-in Hybrid and Prius PHV.

Well, the first generation of the Prius Prime ended up in 2015. The second generation was expected to bear a model for the year 2016. But Toyota did not launch the Plug-in Hybrid for that year.

Besides the performance, the exterior design is almost the same. Just the styling has been differentiated, else the dimension of the car are the same. While, the interior holds some better features now, as compared to its predecessor.

Further, the Prius Prime was available only in a few states of US. While now it has been launched for the whole North American market. The first generation did not meet too much of competition. But now the Prius Prime has a range of rivals surrounding it.

The model line of the Prius Prime holds three models. The Prius Prime Plus is the base model of the series, which is priced as low as $27,100. Then comes the Prime Premium starting at $28,800. While the Prime Advanced is the highest trim available which is tagged at $33,100.

The mechanical powertrain of the Prius Prime is same as the standard Prius. It gets the same 1.8 L inline-4 Atkinson cycle engine. And this engine produces 95 hp of power to run the car mechanically.

On top of that, Prius Prime get the permanent magnet AC synchronous motor with 26 hp to offer. This makes the net power of the car to be 121 hp making 105 lb – ft of torque. The transmission line is powered by the electric motor. It is the Electronically controlled Continuous Variable Transmission.

Besides the electric powertrain, the mechanical performance schedules of Prius Prime are same as the standard Prius. The Prius Prime has an all-electric drive range of 25 miles. While, in our combined test, she delivered 22 mpg.

The EV modes convert Prius Prime from a gasoline hybrid car into an electric vehicle. This mode temporarily shuts down the mechanical powertrain and makes the car run on just electricity. Well, by default the EV is the standard drive mode of Prius Prime.

As compared to the last generation, Prime has gone 50% up in the electric drive range. The last generation delivered a range of 10 – 11 miles on battery. This is all because of the 8.8 kWh lithium ion battery with 95 cells. Further, the charging speed has even enhanced. This huge battery could be charged in around 5 and a half hours. While the old Prime would have been suffering to charge it.

The combined (fuel and electric) mileage of the present day Prime is 54 mpg. While the driving range with the full fuel tank and complete charged battery is around 640 miles. The EPA rates the MPGe of Prius Prime to be 133. This is the class best rating for any PHEV

The Prius Prime has been designed to look different from the standard Prius. The front fascia and the rear are both given a sportier look. Now it looks much aggressive as it looked before.

Well, the last generation of the Prius Prime was certainly dressed up like the younger sibling of standard Prius. The present day Prius Prime gets Quad – LED Projector headlights with the DRL. Further, it employs the fog light along with the LED accent lights. The rear gets the carbon fiber trails. The taillights even get the LED in them.

The front fascia gets the redesigned acrylic grille employed with the active shutter. When we come to the wheels, we meet the 5-spoke 15-inch alloys with the wheel covers. Well, this is what we won’t fancy in a sports dressing.

This design further ensures that Prime bears a low weight. This is what the electric cars demand. And the lower weight has even ensured seamless steering capabilities.

The Prius Prime is pretty electric inside. The steering wheel is heated and is covered with the Softex® leather. Well, the base model gets the fabric trimmed seats. While the upper trim enjoys the Softex® heated seats.

The space in the car is same as it was before. However, the size of the battery is almost double now. But still Prius Prime offers the same seating capacity. Further, the trunk has ample space to carry off the groceries and luggage. It did not even squeeze to fit in the batteries.

The higher trims of the Prius Prime get the 11.6-inches touchscreen infotainment system. This screen has been installed vertically, giving a feel like the tablets. While its usage even resembles the functionalities of the tablets. Well, this infotainment system allows the driver to adjust the electric performance, battery charging and climate control of the car. Besides the system features the Entune premium JBL audio system with six speakers.

Entune Premium Audio system with a 7-inch touchscreen is standard for the base model. This system is a music amplifier instead of the performance adjuster.

Further, the Prius Prime gets the 4.2-inch driver’s cluster display. The display is customizable, which includes energy display, driving mode and climate control.

The Toyota Prius Prime has everything that a plug-in hybrid vehicle should have. It has ample amount of airbags. The child safety is up to the mark. The enhanced occupant safety is even standard for all the Prime models.

While the active safety features the conventional lane departure warning with steering assist. Further, it offers pedestrian detection and automated braking to enhance the driving capabilities. Well, there are even a number of other safety features available for the Prius Prime besides these.

The Nissan Note e-power and the Kia Niro hybrid have overtaken the Prius Prime in some parts of Asia. Actually, they have built a stronger market as a rival of Prius Prime. But overall the Chevrolet Volt is the major competitor of this car. The Prius Prime is better than Volt in terms of performance. But when it comes to fun, then Volt is much enjoyable.

Going for Prius Prime would earn you a number of benefits. This all begins from the Government allowances and carries on to the fuel saving. Indeed, Prius Prime is really a premium car to drive.