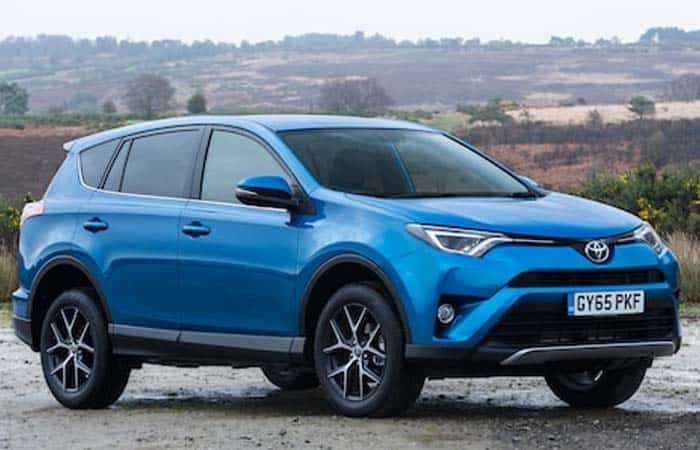 The Toyota RAV4 is a solid small crossover SUV (sports utility vehicle). Toyota is the oldest and largest automobile company in Japan. It has a long list of vehicles ranging from consumer choice to the sports vehicles. It has manufactured these vehicles not only locally but also for the worldwide markets. And Toyota RAV4 is among the notable productions of the company.

Both front and four-wheel-drive configurations are available for the RAV4. And several gasoline powertrain options, including regular unleaded I-4 engine, are available. The RAV4 was actually taken from Recreational Active Vehicle with 4-wheel drive. While the 4-wheel drive configuration is not standard for this car. It is territory oriented. Otherwise, it is just available as a basic SUV, with minimal off-road capabilities.

The RAV4’s is set for the front-wheel-drive with the availability of all-wheel-drive configuration. And it is a small format SUV with lower power ratings. The drivetrain begins from the 2.0 L inline 4-cylinder engine. It is mainly available as an all-wheel-drive version with 149 hp of power and 144 lb-ft of torque. The next is the 2.5 L DOHC 4-cylinder engine. This is the basic powertrain available for the North American market. It comes with 176 horses riding at 172 lb-ft of torque.

Hybrid is the next variant available for the American market. It has the same engine coupled with an electric motor. Well, it uses the Atkinson cycle, like the other hybrid cars from Toyota. And gives out a combined power rating of 194 hp of power with 206 lb-ft of torque. Further, this is even the performance variant of the whole RAV4 series. She took 8.1 seconds to launch from 0-62 mph and attained a top speed of 114 mph.

Well, these powertrains have not increased the agility of this car. But they have saved some maintenance cost. Previously there used to be a V6 variant as well. But it has been discontinued for the present generation. Further, the handling is fine. And the steering abilities make it a good family car.

See Also: Should You Buy New Or Used Car – Pros and Cons

The RAV4 has got some nice cosmetic beauty. Its doors, headlamp and the taillight placement is encouraging. In a way, all these are attached with some modern symmetry. Moreover, it is clear coat painted the car. She is easy to clean and wipe out the fumes as well as dust particles. Further, the front and rear bumpers are metallic.

The RAV4 comes with the LED headlamps and taillights.  In addition to that, it even gets the handy DRL. The flares are pretty fine and they quite luminous. The side mirrors are convex with slightly concave and have extra ability to capture rear objects. Well, RAV4 is just another ornament for the Toyota.

The RAV4 is a two-row car. The first row is fine with sufficient seating capacity. And even the seat adjustment features are easy to use. Well, the second row has even got sufficient spacing. You would not hit your head and legs to the roof and seats. Certainly, you can fit is 5 people including the driver.

The interior ingredient includes faux-leather seats, carbon fiber accent and the leather-wrapped gear knobs and steering wheel. Further, the interior is pretty much silent. But it is not like the performance SUVs that are totally mute inside.

The RAV4 has sufficient passive safety equipment. Like it has enough airbags, adjustable seatbelts, and airbag sensors to protect the occupants. And it comes with the child safety lock and LATCHEs. Further, the active safety is even fine in this car. This SUV gets the electronic stability control, blind spot monitoring,

In addition to that, the RAV4 gets the ABS, traction control, a backup camera, front and rear parking sensors, pre-collision system and lane departure systems.

The Nissan Rogue lies in the same category of that of Toyota RAV4. Well, both are pretty much similar SUVs with match-able performance and structure. Even the technology is quite same in both the vehicles.

Well, the RAV4 could be cool family SUV. But if you are expecting and off-road capability then you would have to look around.