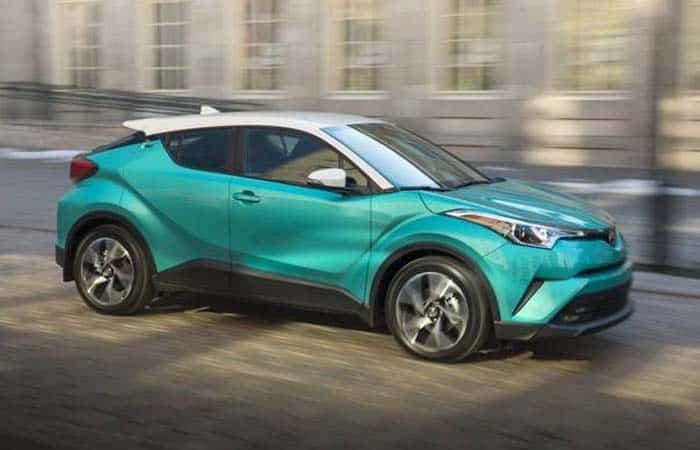 Well, it was 2016 when Toyota introduced the successor of the third generation RAV4. The RAV4 is still alive but in some markets, it is just the history now. In some markets, Toyota had to replace the Daihatsu’s Terios. The RAV4 and the Terios are the small-crossover SUVs. But the concept that came out to replace these cars resembled the SUVs. While it looked less like an SUV.

That is the C-HR, either it means the Compact-High Rider or Cross-Hatch Run-About. Some say that it is the Coupe-High Rider. Well, for us it is the Toyota C-HR. That was the spring of 2016 when Toyota displayed this car during the Geneva Motor Show. It was the first revelation. Later that year the C-HR was shown at the Los Angeles Auto Show. And finally, by the end of 2016, this car was introduced in the market.

The C-HR is mostly based on the same name concept vehicle from Toyota. The exterior structure, shape, interior appointment and the performance mechanism is quite similar. Well, that was not just a concept, it even became a practical model.

The Toyota C-HR gets the conventional small cars’ drivetrain segment. The fuel convenient engines are included in this car. Certainly, they do have some power to show off performance.

The North American market gets the 2.0 L 4-cylinder gasoline engine. It is available only with the front-wheel-drive configuration. This powertrain mates up with the CVT. Well, this is a 144 hp system with 139 lb-ft of torque. And this is the only performance version available for the C-HR. The finest 0-62 mph launch score is 11.0 seconds. And the fastest speed is 144 mph.

The drive is fine. Though it is not a powerful SUV. But it gives enough amount of joy to keep the journey alive. While the CVT would disappoint you. It is quite slower for this kind of a car. The torque reimbursement is pretty sluggish.

The rest of the markets get the 1.2 L 4-cylinder turbocharged engine as the base variant. This is the only unnatural engine available in this series. And the lower power specs forced the engineers to use a turbocharger to enhance the performance skills. Well, this version gets 114 hp of power with 140 lb-ft of torque.

The Thailand and Malaysian markets get the 1.8 L 4-cylinder gas engine with 141 hp of power and 131 lb-ft of torque. The performance specs are not much different. But the 6-speed manual gives some additional bbreadthto this car.

The C-HR is also available with the hybrid drivetrain. It comes with the 1.8 L 4-cylinder engine with an electric motor. The engine is capable of just producing 98 hp of power with 105 lb-ft of torque. And that is all the blessing of the electric motor that raises the power rating to 134 hp.

The exterior styling is not rare. But it is a kind of strange. The shape seems like a space-based SUV. Particularly it looks like that the design is based on the concept of Nissan Juke. Further, the cosmetics include projector beam headlamps, LED DRL, 18-inch alloy wheels, roof spoiler and a trunk spoiler.

Well, everything is fine in this car, but the exterior design is really a catch in this car.

The interior setting is pretty decent in this car. The front seats are quite comfortable and offer enough space for a smooth journey. While the rear row is acceptable for the daily ride. But you might complain about spacing.

Space for the cargo is sufficient enough to carry a journey’s luggage. While putting this car up for running errands would not even be a bad choice. Further, on folding the rear seats, you get plenty of space to carry some televisions, computers, baggage and some other stuff altogether.

The Toyota C-HR gets 7-inch touchscreen infotainment system. This is purely a music player, with radio and the Bluetooth streaming. Well, you do not get anything like the navigation, Apple or Android suit for this car. This is yet another catch in C-HR series. None of the models get any adaptive features. Further, the available features include smartphone charging, voice recognition, six-speaker audio system and telephony.

The safety regulator was generous enough to give 5-stars to the safety of this car. Well, the C-HR comes with 10 airbags, 3-point seatbelts, and LATCHEs. The standard active safety includes the Toyota Safety Sense. This package gets the pre-collision and pedestrian detection system, lane departure warning, automatic high beam and dynamic cruise control. Further, the C-HR gets the stability and traction control, blind spot monitoring, hill start assist and tire pressure monitoring system.

The Nissan Kicks is a similar car. It is a new edition to the Nissan small-SUV production line. Well, the performance is a lot similar in both the vehicles. And the exterior design with the interior set up is even quite comparable.

The Toyota C-HR is a pretty decent SUV with domestic kind of fuel mileage. While the C-HR could serve as the entry-level Sports-Utility-Vehicle.