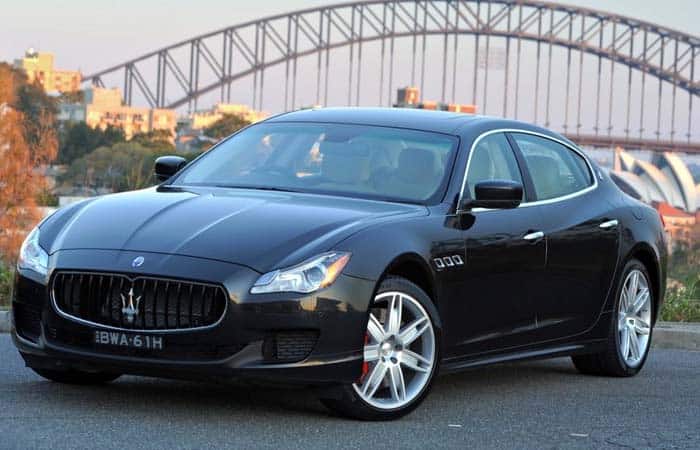 2018 Maserati QuattroporteSome automobile companies have been experimenting the luxury for quite long. Examples like the Audi and the Mercedes reached the incredible height, because of their utmost technology. But there are some that are still experimenting with the luxury.

The same scenario we can find with the Maserati’s Quattroporte. In 1963 Maserati introduced this vehicle at Turin Motor Show as a four-door luxury saloon. Quattroporte earned a lot of fame because of its styling and powertrain. It was specifically meant for the Italian market. But was even sent out to other European nations. While its fame does not last in the Europe, instead of Americans even became the fond of this car.

Since then, it earned a lot of fame in the world of luxury cars. Six generations have been introduced to this car. And every generation of Quattroporte got some special edition. Like in ’71 Karim Agha Khan got the Maserati Quattroporte which got modified drivetrain and interior ingredients.

The third generation, introduced in 1979, featured the coachbuilder edition. These cars had exquisite interior design and classic touch to luxury. The fifth generation got its way into the motorsport. From 2009 till 12 the Quattroporte appeared in the International Superstars Series. While in 2011 the Quattroporte won the Championship. These were totally the sports versions with a sporty suspension and track aerodynamics.

The present-day generation was introduced in 2013. And the present structure of the Maserati Quattroporte was last improved in 2016. The starting price for a standard Quattroporte is $107,400. The model line consists of Quattroporte, Quattroporte S, S Q4, Diesel and the finest GTS.

The Quattroporte is just a choice of Maserati lovers. The true luxury and performance lovers would take a lot of time to start admiring it.

The performance change can either kill it or get killed. Here in Quattroporte, the performance specs have certainly killed the car.

The Quattroporte basic comes with the 3.0 L V6 twin-turbocharged engine. This is the standard drivetrain available for the gasoline engine. Well, this engine offers 404 hp of power with 406 lb-ft of torque. And it is basically offered with the rear-wheel-drive configuration. When you go for the run, it will lap 0-62 mph within 5 trembling seconds.

The all-wheel-drive with this configuration is no different. They offer the same power, same torque, but it runs 0.2 seconds faster than two-wheel-drive. The next difference you would is the handling. The all-wheel version has better torque management, and even the vectoring force is acceptable. While the track best for both of these rank amid 175-176 mph.

Besides the gasoline and matches, we get the diesel engine as well. And that is mainly for the European and Asian markets. Here Quattroporte comes with the 3.0 L naturally aspirated V6 engine. It gets the sleek power of 271 hp with 443 lb-ft of torque. And as per the environmental safety departments, it releases 163 g/km of CO2 while driving.

After experiencing the GranTurismo and the GranCabrio, it certainly becomes hard to identify the difference between these cars. The Turismo is a coupe, while the Cabrio is the convertible. And the Quattroporte is the Sedan. All these three have a similar exterior design. Just the only difference is that the Turismo and Cabrio look aggressive, while Quattroporte has some delicacy.

Well, the Quattroporte comes with 20 and 21-inch alloy wheels. And there are numerous designs available for the wheels. The headlamps flow in the crescent design with the LED lamp. Further, it gets the same grille that is available in its siblings. Well, there is no hood on the bonnet of this car like the other Maseratis. Even it is longer than the GranCabrio and Turismo.

The standard interior setting of the Maserati Quattroporte is quite fair. But when you move up to the higher trim levels, you get finest leather, wood and carbon fiber interior. There are plenty of relaxing material included in this car. Such as the cup holder, armrest, and soothing ambient colors.

Away from the interior setting, the Quattroporte is subtly spacious. Besides the front row, the rear row even offers remarkable space for seating. And you would not even complain about the cargo space in this car.

Certainly, the Quattroporte is dressed quite neatly. We were not expecting such graceful interior in this car. But still, it is not as rich as its competitors.

The Maserati Quattroporte comes with the 8.4-inch touchscreen infotainment system. Well, it is a custom built system. And it features the audio control, telephony, Bluetooth stereo and voice recognition. Besides the touch controls, this system could also be controlled using the rotary gear knob. It is much like its German counterparts. Well, the most intriguing features in this car include the Apple CarPlay and the Android Auto. And for the internet lovers, Wi-Fi is also available in this car. Further, the Quattroporte even gets the 7.7-inch driver’s cluster display with configurable options.

The Quattroporte lies in the standards of the road safety. It has ample amount of passive safety features. The count of airbags and the strength of seatbelts are sufficient to keep the occupants safe.

Indeed, the Quattroporte is a safe car to drive.

We found the Cadillac CT6  as the closest competitor of the Maserati Quattroporte. Well, both of these cars have similar performance schedules and alike interior setting. Even the technology features of both the cars are quite similar.

Well, the Maserati Quattroporte would have attracted more strength if it had a sound performance. But that is one of the major catches in this car.