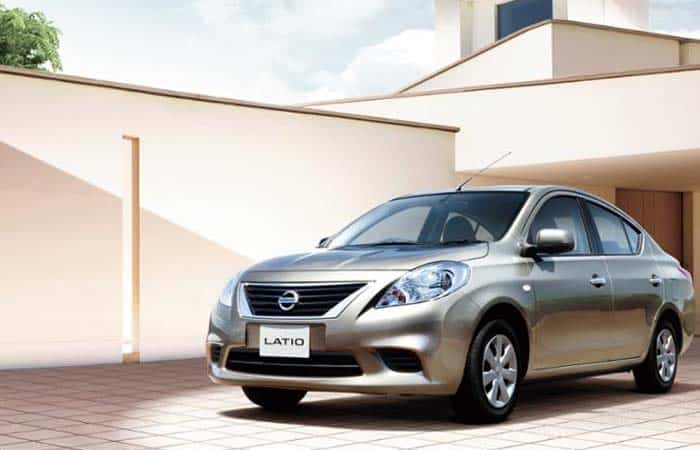 Some cars are just produced to draw controversies. At times they are represented as the unreal figures and just the names. While on the other hand, they are revealed as a present entity living in some part of the world.

Well, the Latio plays the same role for Nissan. It is a controversial parent name for a couple of cars from Nissan. While it is even a model surviving in the Asian markets. Well, the Latio was first revealed in 2011. It was a subcompact sedan, designed for the everyday use. Along with that, some of its variants were structured for the executive rides.

This same car is marketed worldwide under various different badges and names. The Renault calls it Scala, in some markets, Nissan calls it Versa and in some other markets it is famous as Almera. With all these names the Latio earned a lot of fame.

Well, she is still going on with its first generation. But it has received some improvements with time. The Latio received its first facelift in 2015. While some minor improvements were made to the design in 2018.

The Nissan Latio is certainly one of the conventional family sedans that are designed for economy. They offer plenty of techs to save on fuel and even cut down the maintenance cost. Along with that, the price tag on this car is even quite economical. The Latio begins at $13,000 and goes up to $17,000. Well, this is certainly a price at which you can buy a hatchback.

Well, now let’s move ahead and explore the Nissan Latio!

The Nissan Latio is available with 4 drivetrains. Overall it offers 3 powering options with gasoline while only one option is available in diesel. The first gasoline model to be available is the 1.2 L 3-cylinder HR12DE engine. This is one of the low powering engines produced by Nissan. And they are mainly developed for the city cars. Well, this powertrain offers 80 hp of power with 81 lb-ft of torque.

The 1.5 L 4-cylinder is a common digestion. It is preferred in most of the Asian region where performance and consumption are mattered alongside. Well, it is the Nissan’s HR15DE engine that offers 99 hp of power at 99 lb-ft of torque.

The largest variant available for gasoline versions is the 1.6 L 4-cylinder HR16DE engine. This is also designed to target the economy preferring audience. While the power rating is around 117 hp of power at 117 lb-ft of torque.

In the diesel segment, the Latio gets a 1.5 L 4-cylinder K9K engine. This is among the notable engines produced by Nissan. And it has been used on a lot of famous vehicles, such as the Renault Clio. Well, here in Latio this engine offers 110 hp of power with 180 lb-ft of torque.

Besides the performance, the Latio is a very well behaving companion. Its handling traits are subtle to ride this car smoothly in the cities. And even on the highways, the Latio seems understeered.

See Also: What Is A Smart Car, The History, Makes And The Reviews

The Nissan Latio has a pretty basic kind of exterior styling. While its rebadged versions are pretty much good looking. Well, with Latio you would get the old-school halogen headlights, a frisky senior citizen tail design, and steel wheel. While the premium models additionally get fog lights, rear spoiler, and 15-inch alloy wheels. Further, aerodynamics have nothing much to do in this car.

When it comes to the interior of the Latio, it reminds us of the base level hatchback variants found in the developing market. It gets cheap ingredients for the interior and offers just enough amount of space that you are not going to hit the guy sitting next to you. Well, the cloth seats and the fiber accent are the basic ingredients. Seats are not bad at all, and even they offer an acceptable comfort level. But when it comes to the spacing, the Latio is a bit miser about that. On the other hand, the boot is pretty much generous to offer space for the cargo.

The entry level models of Latio just get the audio system with the radio. While the upscale models get the option for the touchscreen infotainment system. Well, the system available for Latio is generally a multimedia player with the audio, telephony and streaming options. While navigation even stays an optional package. The system is fine, but it is not that much advanced as compared to the modern cars from Nissan.

The Nissan Latio covers all the safety standards required for a city car. It has enough number of airbags included protecting the driver and the front row passenger. While the seatbelts are at their best. Further, this car features some basic kind of active safety features. Such as the antilock braking system and the optional parking camera. And this is all you can find in this car.

The Toyota has a car for every market. Whether you visit far-east Asia, Africa or stay in the United States, you would meet the Toyota. Well, for the Latio, we find the Toyota Vios as an ideal competitor.

The Latio would certainly prove to be a fine option if you are concerned about mileage and maintenance. It would come up as a decent car in those circumstances.