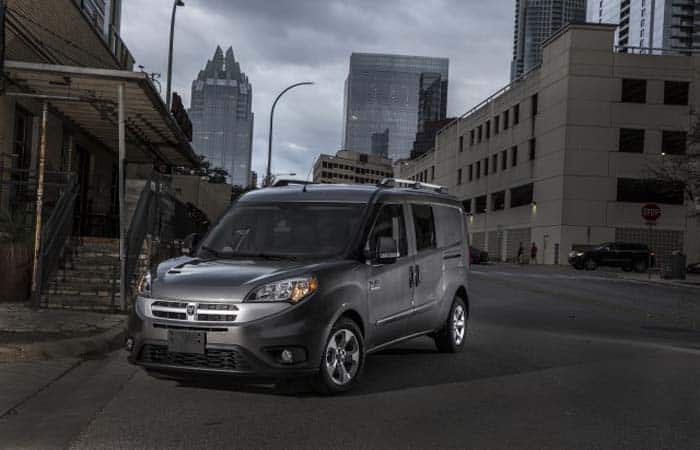 The Ram ProMaster City was introduced in 2015. Well, before that, this vehicle was surviving as Fiat Doblo. The ProMaster City is certainly the rebadged version of the Doblo.

The Ram C/V Tradesman had been rolling in the cities for long. That was the Dodge Caravan-based commercial vehicle. But in 2014 it was announced that the Tradesman would be discontinued and a slightly commercial version would be launched to replace.

Finally, Fiat decided to introduce the global Doblo as a replacement of Tradesman. Doblo is a comprehensive panel van with the ability to run errands. And that was certainly thought to do the job for RAM in North America.

The ProMaster City comes from Turkey. It is the same place where the Fiat Doblo is produced. The ProMaster City is not exactly the Doblo. But in a way, it is an improvised version of that van. Certainly, it has been designed to meet the requirements of the North American markets.

The Doblo has entered its second generation in 2015. While it is the first for the ProMaster City. It is a comprehensive companion for trade and family rides. Certainly, the leisure rides, like the picnics suits the best on such vehicle.

The base price for this van is $23,495. The base version is named after is an ancestor, Tradesman Cargo Van. The Tradesman SLT Cargo Van comes following. While the Wagon and the Wagon SLT are the upscale versions of the ProMaster City.

The commercial vehicles are supposed to be fuel efficient and powerful. Every company wants to save on fuel and maintenance. Along with that, they even want to save time spent for commuting.

Relatively, the ProMaster City has an eloquent drivetrain, which can fit in every business. Further, its reasonable mileage even suits families. The ProMaster City comes with 2.4 L inline-4 cylinder engine. And gets the 9-speed automatic transmission. Further, the front-wheel-drive is the standard driving configuration available.

The Ram ProMaster offers 25 mpg as combined fuel mileage. Certainly, the ProMaster City has a superb mileage in its class.

Well, the power rating for this van is even quite splendid for the commercial as well as family rides. This 2.4 L Tigershark engine is rated at 177 hp of power with 174 lb-ft of torque. It is not a very strong power rating. But it is mainly a fuel-efficient tech. Well, with such schedules the fuel costs definitely get lower.

The very next aspect is the maintenance cost that every company tries to make it lower. Well, thanks to Ram for including an economical drivetrain. This Tigershark Multiair engine is quite economical in terms of maintenance. The standard interval for each oil change is recommended for 10,000 miles. Well, we have noticed that after some age, the recommended oil interval tends to decrease. But still, it remains more than a lot of other vans in the market.

The handling matters a lot for the commercial vehicles. Well, we do not get the electronic differentials and the torque vectoring system in these cars. But the art lies in the design. The ProMaster City has a fine handling and its steering capabilities are also pretty fine.

The Ram ProMaster City has the same design as that of the Fiat Doblo. There are just a few changes in the design, while rest is all same. The ProMaster city is meant for the North American market. Consequently, the amendments made in this van are based on the American demand.

The Tradesman version is a full-fledged cargo van. It is fully covered from the rear sides and the back. While the Wagon and the Wagon SLT are the passenger vans with the window options. The beautification includes a colored grille and the full wheel covers. While the lights have the halogen lamps.

The ProMaster City ranks among the best because of its cargo handling techniques. The cargo van has the total capacity of 131.7 cubic feet for the cargo. The wheel to wheel cargo width is measured as 48.4 inches. While the overall length of the cargo floor is 87.2 inches.

The bay height is 51.8 inches. It means that you can equip up to four rows for your cargo placement. Well, the ProMaster City is 21.5 inches higher from the ground. You would not have to pick your weight higher to put it in.

There is a bit large windshield in ProMaster City as compared to the other vans. It certainly means that you can see around more corners in this van.

The passenger van gets the seating for five including the driver. Seating trims are fine and even the seats are comfortable. But we are not much satisfied with the legroom in this car.

The navigation system quite enhanced in terms of responsiveness and the graphics. It is quite easy to use and is understandable. Certainly, it is not like a tension generating system which becomes hard to understand.

Safety is pretty essential for every car. Whether it is a family ride or a commercial pickup, it should have all the necessary safety equipment. The Ram ProMaster is eloquently safer for the occupants. It has seven airbags, reflexive seatbelts, and LATCHES. Further, the van has been designed in a way that it offers optimum safety while driving.

Well, safety depends on the drivers. They are supposed to drive safely and with caution. While the safety equipment only enhances the level of driving.

The ProMaster City is the sweetheart for a lot of concerns. And the endless marketing campaigns of Ram would certainly ensure a better position for this van.