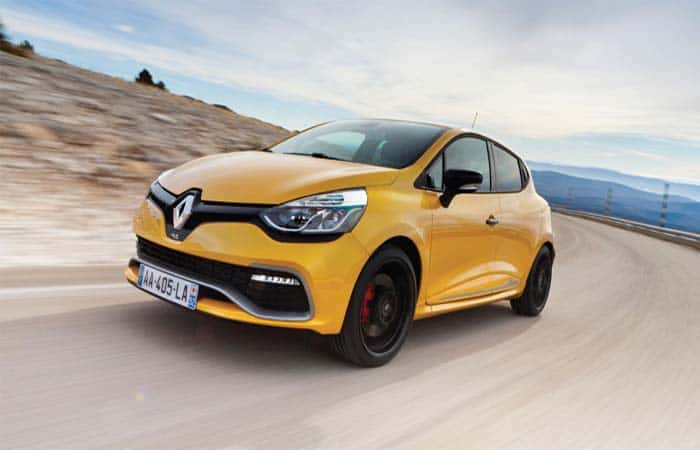 Every hatchback does not mean that it has no power and elegance. Instead, there are some thrilling and superb hatches available. Well, there are too many examples in the present day. But one of the renowned example from Renault is the Clio Renault Sport.

It was 1998 when Clio was officially launched. The car was designed using the universal concept of the Renault Supermini. It is a specially designed concept for the performance hatchbacks. Well, Clio had been using the same powertrain for almost 14 years since its introduction. And along with that, it even followed the similar body style. But in 2012, the mechanics were changed. As well as the body style was even differentiated in 2013.

But with that particular specification, Clio has ruled the hearts of a number of drivers. It is among the best selling cars in Europe. Well, it is just because, it is a “Supermini”. Further, it is not a sedan, nor a total hatchback. It is something between a sedan and a hatchback. It has the performance of the muscular sedans, but a decency of a gentle hatchback.

Well, Clio is even famous for the rally sports. Besides that, it has even participated in a number of Multiclass Grip Races. And it not just participated in those events, it even secured a tremendous position for Renault.

The starting price of Clio Renault Sport (RS) is $26,900. Well, you have got to import this car to North America, if you wish to drive it. As Renault is presently not scoping the North American market tendency. Certainly, it should, but in a way, Clio would get a massive competition from the gasoline, hybrid and electric vehicles.

Since the beginning, Renault has been using the 2.0 L engine for the Clio RS. With time, the powertrain was developed to compete in the prevailing competition. But in 2012, things got changed. The technology has developed enough for the smaller engines to compete with the monsters of yesterday.

Renault took the improvisation and introduced the 1.6 L inline-4 turbo engine for the Clio RS. During the Paris Motor Show 2012, the 1.6 L Clio RS was introduced for the first time. Not just the powertrain, the drivetrain was improvised as well.

Though it is a turbo engine, it has some good specs for fuel saving. The Clio RS delivers 42 mpg as combined fuel mileage. Practically, these are some ordinary stats. But compared to some tamed hatchbacks, these are pretty fine results.

Overall, it was a good experience in driving Clio RS. But it is not that sweet as we were expecting.

Hatchbacks remain hatchbacks. No matter how much powerful they are. But a three door hatchback could make sense to a rally driver. But it would be just a toy for someone looking for a family ride.

This is what might have been in the thoughts of Renault that they extended the shape of Clio RS. This car was previously a 3-door subcompact. But in 2013, the shape was changed to a 5-door hatchback.

Further improvements include LED headlights, bigger wheels and composite rear. To sport the sporty character of the engine, plenty of aerodynamics have been added in this car. It can deviate, distract and attract air. And can certainly maneuver a good amount of down force on the car.

But guess what, yellow is the most attractive color in this car. The others are even fine, but yellow is really the dirty fellow.

The Clio Renault Sport has a crispy interior. Well, it does not come with any luxurious upholstery. But it does enough beauty to attract the sports enthusiasts. Clothed seats are standard in all the variants of Clio. Further, the spacing is pretty fine in this car. You would not really feel stuck in the seats. Instead, there is ample amount of space for 4 people.

The trunk does not offer much cargo capacity. But still, you can carry your monthly grocery in this car. This is all because of the 60:40 bisection of the rear seats. Well, the steering wheel feels comfortable, because of the leather covering on it.

Technology is one of the requisite while purchasing a car today. Especially the city runners are supposed to have useful tech installed. Well, one of the good reasons to buy the Clio Renault Sport is its technological features.

It comes with a 7-inch touchscreen infotainment system. Multimedia is obviously included. Well, the navigation is optional. Radio along with the audible speakers is standard. Further, there is an ignition and stop button in the car. It makes it hassle-free for a number of us. As you will not have to insert the key and ignite the car.

See Also: What is a Smart Car, The History, Makes and the Reviews

The Clio Renault Sport has ample amount of safety package included for the occupants. There are too many airbags in this hot hatch. Even the seatbelts are pretty easy to use in this car. Well, you would not really feel insecure while driving Clio.

Further, there are plenty of active driving features available in this car. Like the cruise control, speed limiter, electronic brake distribution, electronic stability control and the hill start assist.

It is not really hard to find a competitor for a hot hatch. There are plenty of hot hatches roaming around. And this made us able to bring up a competitor of the Clio. The Peugeot 208 is one of the closest competitors of this car. Well, it is pretty hard to define, which one is better. Because both of these are pretty similar. But still, the Clio wins this competition because of its sporty looks and performance.

The Clio Renault Sport could be a good choice for you if you need something fast and neat. It emits less Carbon Dioxide and is quite active. And the price tag, that is even pretty economical.