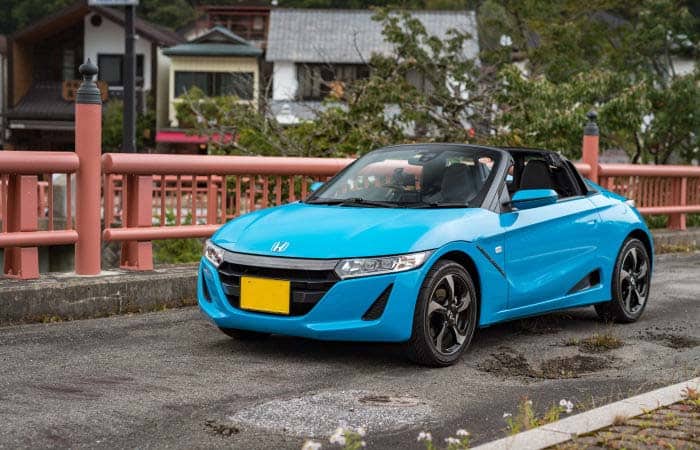 The strange looking cars are normally found in the motor shows as the concept vehicles. But some of those freaks do come out in the production market. Well, usually they do not really leave an impressive impact on the drivers and spectators. But at times they turn out to be the best.

While the one we have here does have some agility. But it lacks a lot of things even. Well, here we are talking about the Honda S660. It was just a prototype or a concept vehicle. But its fate shuns and it came out into the market. In 2010, Honda chooses Ryo Mukumoto to design a sports car. Mr. Mukumoto was among 400 of the engineers who competed to present a production market design. And he is the youngest engineer in the Honda’s development team.

Well, Mukumoto merged some designs from the present and obsolete vehicles. He mainly worked on redesigning the Honda Beat. And he worked out the powertrain in the way it was installed in S550. While its platform came from the Honda N-One. After all the effort, the concept design was displayed at 2013 Tokyo Motor Show.

Later in 2015, the S660 was introduced in the Japanese market. The response there was fine and even a lot of folks admired the tiny little design. But that could be just found in Japan. The Honda S660 is the Kei sports car that abides by the government regulations.

Honda really wants to have this car posted in the North American and the rest of the world markets. But till now there have no signs that when they would be coming up with an international design.

Since last few years, Honda has shown some remarkable improvement in the sports section. Like just a few years back the company introduced the NSX, a hybrid sports car. Just like that, there are some more examples as well.

But they all are the bigger ones! While the Honda S660 is the tiniest among all the present day Honda sports cars. Well, the S660 comes with the 0.66 L 3-cylinder engine. That is exactly as per the Kei cars postulates that the powertrain should not be more than 660 cc. Well, to make this tiny little engine roar a bit loud, the Honda has blessed it with a turbocharger. It makes the overall output of this car at 63 hp with a peak torque at 77 lb-ft. Well, it is the Honda S07A Earth Dream engine which is even found in the N-One and the N-Box.

The S660 is certainly an underpowered car. But it has some decent guts to move faster than its cousins. Well, it lapped 0-62 mph within 13.3 seconds. In a way, it is a lot better than a number of Kei cars. But there are some even faster than this rating. Further, the S660 managed to reach 87 mph. And that is what we ascertained as its top speed.

Well, this center cruised mid-mounted rear-wheel-drive car is surely a fun in some ways. It sweet tweaks make it twitter like a sparrow. While the hard suspension truly gives a sporty sensation to the S660 at its high speeds. Especially, the sharp turns and speedy corners are very much under control.

The frontal designing is a bit similar to the NSX. While the rear design resembles the CR-Z. Further, pretty nice cosmetics have been chosen for this car. Like the LED lights, alloy wheels, soft top are some basic content. Ahead of that, the S660 is 133.7-inches long and 58.1-inches wide which is quite under the specifications provided by the Kei car management.

Well, if you park it somewhere among the standard hatchbacks or the sedans, it would certainly feel like a baby car. And if you take it around the SUVs, it might disappear.

The inside would definitely seem smaller. But certainly, it is not like that. Well, would find a 13.8-inch leather-wrapped steering wheel, leatherette gear knobs and the leather seats. Once you sit in this car, you would never feel that it is congested. Instead, the seats feel roomy and even the outside view is quite normal.

Everything is appointed just in the right fashion it should be. Ahead of that, this baby cannot hold anything more than two people and a cup of coffee.

The Honda S660 comes with a very useful infotainment system. More than just being a multimedia player, this system offers pretty cool performance options. Well, it has the g-meter which displays the accelerative index of the car. And nothing of it is apparent. Instead, it is all real.

Well, it even gets the option for the navigation, smartphone connectivity, and radio play. Further, the colored driver’s cluster display is quite neatly designed.

See Also: What is a Hybrid Car, How it Works and the History

The airbags and the seatbelts are obviously found in this car. But away from the passive safety, Honda has included sports safety features as well. The S660 gets the handling to assist with the traction and stability control which grips the cars on sharp turns and corner if it is traveling faster than 56 mph.

Further, safety is all in your hands!

Everything is fine in this car. But an upgraded and powerful version would be awaited to definitely give a challenge to MX-5.