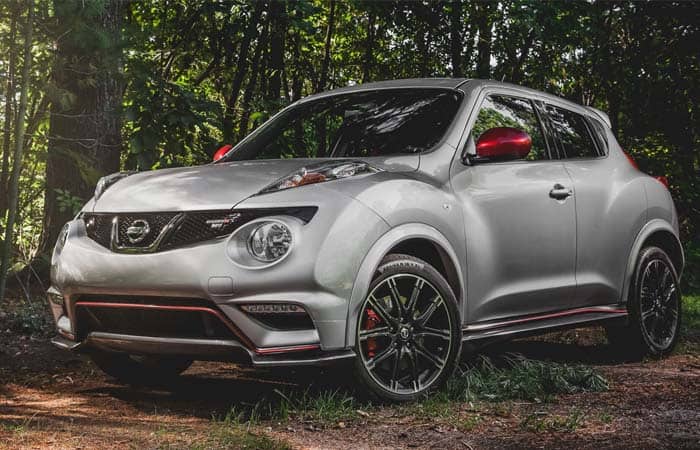 The Nissan’s NISMO package adds some venture to any car. Well, Nissan has included the NISMO package to a very few variants, including the GT-R, 370Z and the Juke.

The Juke had been very lethargic fella for the North American market. And it served here for a very less tenure. But in the rest of the world, this car is rocking. Especially the NISMO and the NISMO RS package has made it rock.

Though the NISMO package was available in the North American market as well. But it did not create much difference. Even it was not up to the expectation of Nissan. Certainly, that had to take it away and as a replacement, they brought in the Kicks.

The NISMO package has affected the whole Juke pretty positively. The exterior styling has been revamped giving it a sharp look. But still, it remains a tadpole, like the rest of the series. While some softness has been included in the interior. And the drivetrain mechanism has been sharpened up for better and smoother performance.

Well, you go towards the trim level for this car, then you would only get some optional packages. While the Juke NISMO RS takes the top seat based on some additional stuff included in the design and performance. Further, the Nissan Juke NISMO has climbed up to $27,000 from its last known price of $25,805 in the US.

The Nissan Juke NISMO is just another SUV with the hatchback traits. But still, it makes its way in the European and some other markets.

See Also: All You Need to Know About the Driveless Cars

The Nissan Juke NISMO comes with a single engine but three power levels. Well, the mechanism includes the 1.6 L turbocharged 4-cylinder engine, available in gasoline only. Further, the front-wheel-drive comes standard with a 6-speed manual transmission. While if you go for the all-wheel-drive, the continuous variable transmission comes along.

The Asian models get a power rating of 190 hp of power at 177 lb-ft of torque. The front-wheel-drive remains common among most of the Asian markets. While there are just a few that opt the all-wheel-drive.

The older North American models are now being offered in the European market. The base ingredient is powered with 200 hp with 184 lb-ft of torque. And the RS comes with 15 additional horses making 10 lb-ft.

What is so different in the standard Juke and a NISMO? It is just a bit powerful and offers a few cool handling details in the all-wheel-drive models. Besides, there is nothing much different.

The front-wheel-drive configuration brings you the same old handling traits. While the all-wheel-drive comes with the torque vectoring and a smoothened steering ability bringing some fun to your journey. Well, the handling is not bad, but it is not too much improved. Further, in our tests, the Juke NISMO RS stopped from 70-0 mph within 161 feet. And it’s capable enough to hold the road for 0.87 g.

Indeed that is all fine enough for a family level performance SUV.

Well, there is much you could get with the NISMO based Juke. Though it is same as the standard version. But the attractive cosmetic selection makes it a bit unique. Well, it is the same alien shaped tadpole, but it gets some nice color contrast. Such as the red pearl wheels and the ivory pearl body color has a lot of attraction and it really catches your attention. Further, the NISMO package adds 18-inch wheels, extended aerodynamics but limits the color options to ivory, black and platinum shades.

The interior gets wrapped with leather all around. Sports leather seats, leather trim, and the leather accent. Besides, the convenient spots, seating space and even the space for the cargo is the same. Well, there some color options available for the interior setup which includes the contrast color alignment as well. Like the red strips over the black seats which catch your eyes over them and make you stare at them. Additionally, there is the NISMO badge on the seats. And if you go for the NISMO RS, then the RS affix NISMO in the badge.

The Juke NISMO features the same 5.8-inch touchscreen infotainment system like the standard model. Well, it functions the same way and has everything similar besides the navigation that comes standard on this car. Additional features include the NISMO tachometer with a red-colored dial. Further options include the Aux cable and the illuminated bars. Well, there is no Apple CarPlay nor Android Auto. Means you are on your own to keep your tech playing.

All the essential passive safety specs are available in this car. It has enough number of airbags and quite stretchable seatbelts. But when it comes to the driving dynamic aids, the Juke NISMO falls short of numerous features. Well, the only available feature is the parking sensor and cameras. While the active safety specs are limited to antilock braking system and the torque vectoring (available only in AWD).

The BMW’s own Mini Country takes much of the preference and is considered flexible than the Juke NISMO. It carries plenty of drivetrain options, including gasoline, diesel, and electric versions. And it has a decent design with a comfortable interior. Certainly, it takes on all the benefits than the Juke NISMO.

The funky Juke NISMO is a hard option for the family drivers as well as the performance lovers. But the Nissan fans would surely die for it.