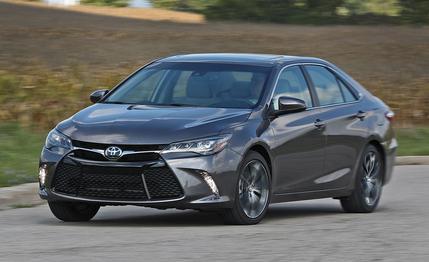 Since its introduction to the market, it has been through 12 generation. The present day generation came into the market in 2011. While there has been a new generation launched for the franchise in the present year. This generation will debut as the model for the year 2018.

Before Camry, Toyota Corolla was the only car of this company that marketed throughout the world. But in 1992, Camry became Toyota’s second car to be marketed throughout the world. In 1992, the body style of Camry was enlarged to a mid-sized sedan. Through some impositions by the authorities, the smaller body style had to be retained in Japan due to an economic slump. But the mid-sized sedan body style of Camry was demanded more than the smaller one, in nations other than Japan. This made Toyota to produce both the body styles simultaneously.

Camry has been a base design for some of the cars of Lexus series. With time, the series got independent in terms of designing the cars, but still today some of the cars from this brand resemble Camry.

The present day Camry is in its 11th Generation. 12th Generation is up for the next year. Well, this one bears the base MSRP of $23,070. The model line has 7 models: Le, XLE, SE, XSE, Hybrid LE, Hybrid SE and Hybrid XLE.

The Prestige Camry holds only the V6 engine. In North American markets, the Hybrid Synergy Drive is offered with the Regular Camry. It comes with the 2.5 L engine having 200 horses.

When we move out of the North American market, we get the 2.5 L Hybrid Camry as standard. Previously it was offered with a 2.0 and 2.4 L engines, along with the trim line of 2.5 L. But presently the 2.5 L inline-4 has been set standard drivetrain.

For the Asian markets, only a 2.4 L engine was available previously. But now the engine line has been variated between two drivetrains. The 2.0 and 2.5 L engines have been made available. The 2.0 L has the 145 hp of power. While the 2.5 L is the Hybrid Synergy drive.

Initially, Camry was an entry level sedan. By 1991, the body style was transformed into a mid – sized sedan. The 11th generation has been heavily improvised in terms of its cosmetics and exterior designing.

Along with the exterior, the interior designing for the 11th generation of Camry has received a lot of changes. Well it does not resemble Corolla, but it does resemble the Toyota Avalon. Toyota calls it a sporty interior, but we would rather call it a family equipped apartment.

It’s lushly décor family compartment, with beautiful stitches on the seats and ample space to sit. Camry allows adults of almost every height to fit in the car, especially in the back row. The back row has enough space for 3 passengers.

While the trunk can easily bag your groceries and veggies.

This car has managed to get 5 stars in terms of safety. The passive safety of the car is sufficient. Under the heading of passive safety, we even get Whiplash Injury Lessening, Emergency locking retractor and LATCH.

The Chevrolet Malibu is one of the closest competitors of Toyota Camry. There is no much difference we get in both the cars beside the price tag. Malibu is less costly as compared to Camry.

Fuel mileage and a decent price tag makes Camry a consumer favorite car. This is because of its decency, which makes it a vital choice.